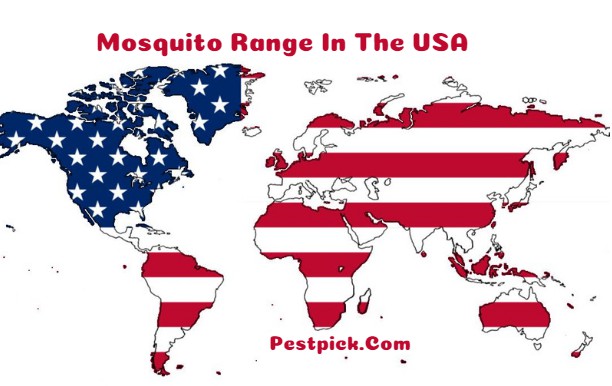 The mosquitoes are found everywhere in the world except Antarctica. You will be shocked to know that there are more than 3000 species available of those bloodsuckers. However, the mosquito range in the USA 2023 reports show that there are 174 species of mosquitoes live in the United States, and they are developing their range due to the ideal weather and temperature.

Mosquito Range In The USA 2023

Several states of the USA have fallen into the mosquito problems, and the people suffer from various diseases due to many mosquitoes. That is because the USA has ideal weather and for some steps taken by local state bodies to control amphibian and reptilian populations has given a chance to develop mosquito ranges over time on the United States. Now, take a look at top cities that have various mosquitoes as per the Orkin’s list.

The temperature and weather play a vital role as a factor to develop the mosquito range in the USA. For example, in the cool weather, you will notice fewer mosquito activities. However, the non-hibernating mosquitoes will begin to pass away as when the temperature reaches 50°F. On the other hand, the hibernating mosquitoes will start to seek winter in resonating woods by abandoning all hiding spots.

When you notice the first frost, you can count that the mosquito season is over. But, there is a great possibility that some hibernating mosquitoes will spur up during unexpected warm spells while winter. They can also return to their hiding spots when the temperature drops.

The mosquito season starts on Arizona are early March as the warmer regions in the United States. Now, the mosquito season remains on that area as long as the weather is suitable for them. The mosquito season in Florida varies from different parts. Like, if you are in the cooler part, you will usually experience those bloodsuckers at the start of March. The mosquitoes in South Florida free themselves in February. That is because the temperature reaches 28-degrees Celsius at that time on Florida, and that temperature is more than ideal for those bloodsuckers. You can notice the same case in Atlanta and Chicago where sun helps them to develop their range.

Different Types of Mosquitoes in The USA

You will notice four most common types of bloodsuckers in the USA, and those are as follows:

It is the most common bloodsucker in the USA. Its species are Culex Pipiens and Culex restuans Theobald. These are most common on the Northern part of the United States and found on the polluted water.

The species of these mosquitoes are commonly Culex fatigans. It is most common and found on tropic and sub-tropic regions.

These types of mosquitoes are very dangerous and can be found in most of the places in the USA. They spread more than 30 viruses. They are aggressive biters too.

These types of bloodsuckers are found on the urban areas of Southern Florida and in the cities along with the cost of Texas and Louisiana.

The mosquitoes have become a threat for us because they are spreading dangerous viruses among us. At the same time, they lay eggs and breed faster than we can think and exists everywhere in the globe. So, you guys should take the Necessary steps, Use a best mosquito repellent device product to get rid of those bloodsuckers for good.